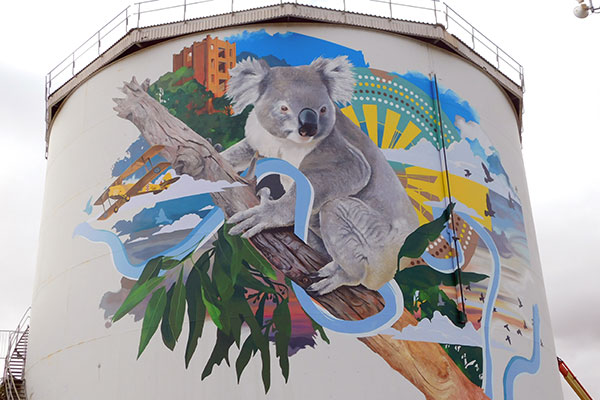 Using over 120 litres of paint applied to the murals and river that connects the two artworks, the outcome is an incredible sight to behold.  With the best view across town, visitors and residents are able to head to the water tower and immerse themselves in a visual collection of landmarks, activities, flora and fauna that resonates with our community. The stories behind the design include significate icons for the Narrandera Shire Community with the colours inspired by our local environment including the colours of sunsets viewed from this site.

The Lizard – The name Narrandera is derived from Narrungdera, the name of the Wiradjuri clan that inhabited the land where the town now rests, meaning ‘place of many lizards’ (Eastern Bearded Dragon).

The Koala – In 1972 the community established a reserve on the edge of the town on the Murrumbidgee River. A tiny number of Koalas were introduced and have grown into a healthy population of many hundreds now inhabiting riverside forests >100km from Narrandera.

The Tiger Moth Airplane – During World War II the No 8 Elementary Flight Training School was established on the site of the present Narrandera airport.

The Paddle Steamer – From 1858 steamers were a frequent sight on the Murrumbidgee River, the 75 tonne PS Wagga Wagga carried wool and stores between Narrandera and Hay for 40 years.

The River – The Murrumbidgee River has many stories to tell of Wiradjuri survival, colonial settlement, development of farming and irrigation. The river and its related waterways; Bundidgerry Creek; Lake Talbot; Narrandera Wetlands; along with its Red Gum Forests and beaches are part of Narrandera’s heart.