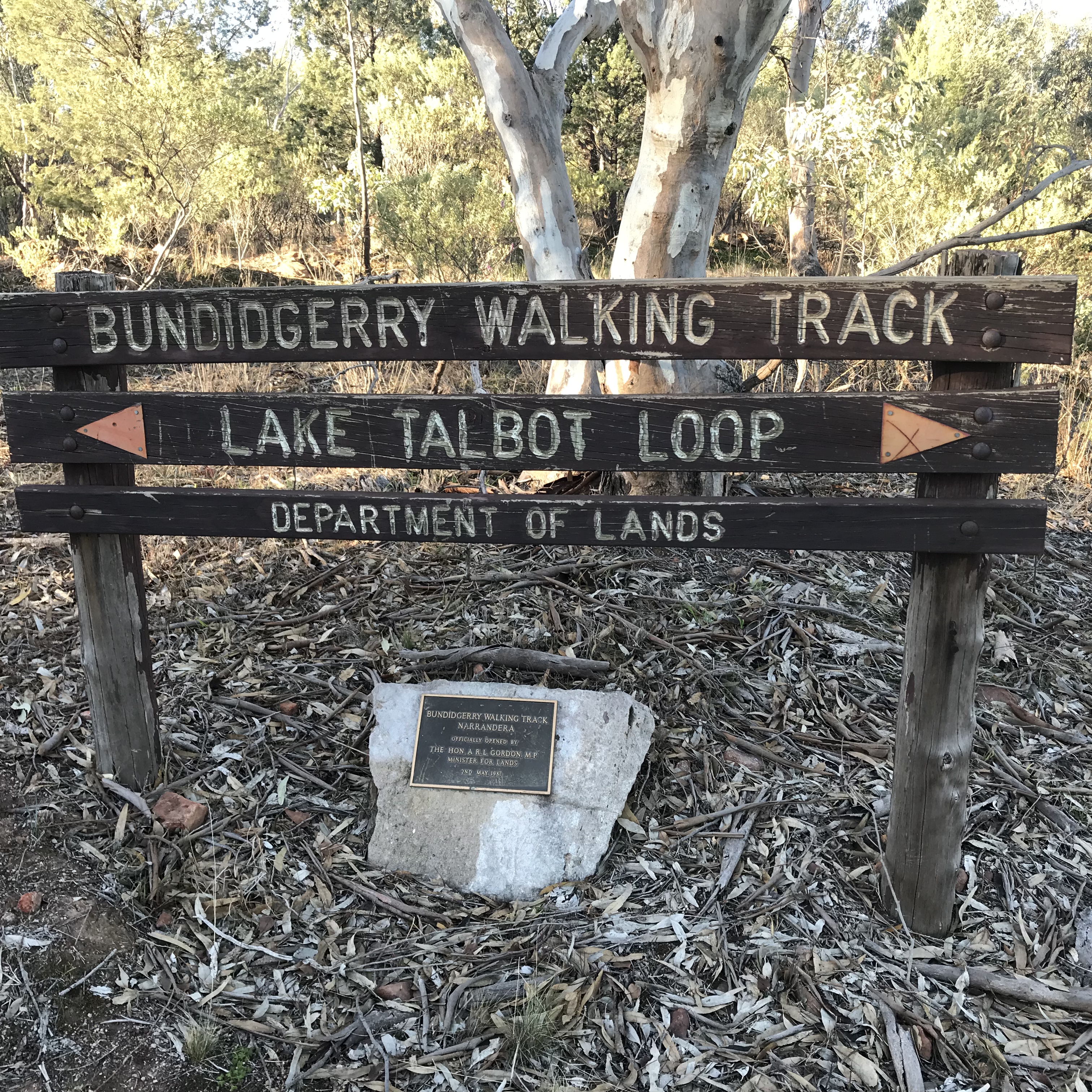 Lake Talbot was originally part of Bundidgerry Creek, a flood watercourse of the Murrumbidgee River. The Murrumbidgee Irrigation Area main canal roughly follows the course of the Creek from Berembed to Narrandera. The last 6km of the canal from the “Bundidjarrie” Station woolshed has protective banks preventing the entry of floodwater. Over the final section the canal was fully excavated on the southern side of Bundidgerry Creek. A bank was provided to exclude river floodwater and on the northern side a lower bank to prevent flooding into the now abandoned bed of the Creek. This northern bank was breached during the 1924 flood creating a lake with a water level corresponding to water levels in this part of the main canal. Mr Talbot convinced council to retain the flood-made lake.

Lake Talbot is lowered during most winters when the main canal is drained. This draining is done when there is no demand for irrigation water and allows maintenance work to be carried out on the canal structures. Exposing the empty canal to frost contributes to the control of submerged aquatic weed.

The normal water levels in Lake Talbot are controlled by a regulator in the main canal near the park gates.  The Lake is used extensively for boating, water-skiing and for fishing and has been the venue for national ski titles. Fish are quite plentiful. The canal and river are also well stocked and fishing is permitted on all three water bodies. Boating however, is discouraged in the canal system.

At the beginning of the track there is a tree nursery operated by the NSW State Forests where native plants and seedlings are nurtured for farm and garden use.   The sandhill on which the tree nursery is located is believed to have been called “Narrung derah” for the local clan (within the Wiradjuri Tribe).  Narrandera is a corruption of this word. The cemetery contains very old graves of some of Narrandera’s earliest inhabitants. It is now grassed over and only the headstones are evident.  The inscriptions are still quite clear on most of the gravestones.  The track moves into bushland in the vicinity of a disused quarry. The quarry, originally known as Nobles Narrandera Quarry was used for the extraction of quartzite.

Once consisting of a sand bottomed pool of untreated water, this popular “swimming hole” has been transformed into a recreation area.

The complex consists of an Olympic pool, children’s fun pool with rampage slide, a 100m water slide, and toddler’s pool. The kiosk, barbeques, picnic tables and play equipment add to its appeal. Harmony has been retained between the pools and their natural surrounds, with one side bounded by Lake Talbot and the other by an amphitheatre of terraced lawns and shade trees providing a buffer to the outside world.

The Canal
The canal works were completed in 1912.  The main canal is the major supply of water to the Murrumbidgee Irrigation Areas. The water is used predominantly for rice growing although there is extensive fruit growing, viticulture and vegetable growing.

Narrandera Flora and Fauna Reserve
Along the track the careful observer can enjoy the wildlife prevalent in the area. There are the familiar red kangaroos and koalas.  Echidnas are seen occasionally inhabiting the rocky slopes. Possums are numerous but their nocturnal habits mean they seldom appear in daylight hours.  You may be lucky enough to spot a rather elusive wallaby (sub species not identified) which has been seen on occasion. Some 65 species of bird have been identified.