Our Growers and Producers

With agriculture as the main economic activity, Narrandera Shire has a fantastic offer of agri-tourism and locally grown produce to suit all foodies. The main activities being cropping (grains, legumes and oilseeds) and cattle and sheep (for wool and meat) production.  Find out more about some local growers and producers in our Shire.

Website: ferrero.com.au
Agri Australis, a Ferrero Group subsidiary, has commenced in an exciting new hazelnut project in Narrandera, and will see the planting of more than one million hazelnut trees on 2,000 hectares.  The farm potential is 5,000 tonnes, however the project aims to support and encourage farmers to plant hazelnut trees as an alternative.

Planting commenced in May 2014, with full production aimed for 2022.

Arcadia Saltbush Lamb is the brand established in 2006 for lamb produced by the Strong Family at Boree Creek. They supply Knights Meats & Deli in Wagga Wagga 40 – 50 lambs per fortnight all year round. The product has a loyal customer base in the Riverina who enjoy the unique eating quality of lamb that has grazed Old Man Saltbush & Acacia shrubs. Over 3 million trees & 400 hectares of saltbush have been established on the farm since 1997. All of their lambs are born and raised on the property ensuring a product of the highest authenticity when it comes to regional produce. Low food miles & low stress handling also contribute to the quality of the lamb.

Website: barellanbeer.com.au
Barellan Beer is a brewing company with a difference, producing beer of ‘single origin’ that contains malt only from Barellan farmers, and is not-for-profit community owned. It all began in 2014 when local Stuart Whytcross, a keen hobby brewer and craft beer enthusiast, had the ingenious idea to turn the faceless commodity of the premium locally grown Barellan barley into beer.

Stuart approached the Barellan community, who wasted no time jumping on board with a successful crowd funding campaign and donations of goods and services. Then they got their hands dirty with brewing the initial batches, recipe tasting nights, choosing labels and of course supplying the precious malt barley.

The first batch of 3.9% Golden Ale was launched to the public in October 2014, selling out in the first weekend. It’s easy to understand why. The approachable, easy drinking golden ale is lightly hopped to complement the honey like malt character from the fresh locally grown clean malt.

It’s then balanced with citrus/pine hop flavours and aroma. Some describe it as the perfect session beer. Barellan Beer is available in beer and draught form. However, you will only ever find the beer available in draught form at the source, in Barellan.

A 1104-hectare almond farm situated on the Sturt Highway west of Narrandera – makes a spectacular photo in August/ September when the almond trees come into bloom.  Almonds can be purchased through the Select Harvest brand in local supermarkets. 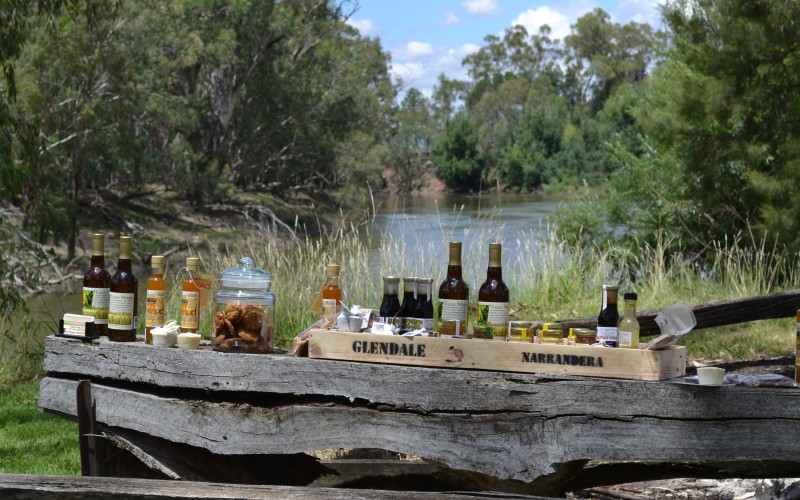 Location: 187 Dellapool Road, Sandigo
Facebook: facebook.com/BarbarasFresh
Situated on the bank of the Murrumbidgee River at Sandigo is Glendale Citrus & Hazelnut Orchard. Graham and Barbara Eipper invite you to hop aboard a vintage tractor-drawn covered carriage and meander through their orchard where you will often stop to pick an orange, crack a hazelnut or even spot a Koala! The one hour guided tour of the Riverina’s first and only citrus and hazelnut orchard ends at a picturesque river campsite where you will enjoy morning or afternoon refreshments, or instead you can pre-book a relaxing lunch which includes Barbara’s mustards, salad dressings and other home-made seasonal bounties.

Bookings are essential and on offer by appointment only to groups of 12 or more people. For further enquiries phone (02) 6959 8286.

Glenfynefarms, which located west of Narrandera, covers an area about 2,300 acres with a capacity around 20,000 head of Pure British Breed (cattle).

Second-generation apiarist, David Mumford began his fascination with bees at the age of six, eventually joining his father in his Narrandera based bee-keeping business. Together they pioneered commercial pollination in the Riverina Murrumbidgee area.

In 1973, the Mumford family began honey production, launching the brand King Bee Honey six years later. Today they manage over 450 hives that annually produce 60,000kg of the much sought after decadent honey, with the remaining beeswax sold to candle makers. The bees feed on the nectar of a range of Eucalypts found in the region including mallee, redgum, stringybark citrus and ground flora, giving King Bee Honey a lush and distinct Aussie flavour.

The Mumford family are passionate about the sustainability of the beekeeping industry and fostering the art of true beekeeping, considering around ninety percent of the world’s nutrition is pollinated by bees. And while honey is now their main business, David continues to head to Robinvale in Victoria for the annual almond pollination, joining 110,000 other hives.

Website: manildra.com.au
The Narrandera mill is ideally located to draw quality wheats from both dry land and irrigated crops in the MIA (Murrumbidgee Irrigation Area). This enables Manildra to produce quality flour for biscuit manufacturers, bakery and specialty flours as required, to competitively service customers in NSW and Victoria.

The Tanta Gold label commenced in 1995 and is mainly produced and harvested with nature within 150km of Narrandera. The varieties of Tanta Gold Honey available change with the seasons. Varieties of honey include ironbark, mallee, red gum, citrus and river gum.

Honey connoisseurs know that each honey variety has different characteristics much the same as wine. Tasting notes for some honey varieties include such things as ‘a soft finish’, ‘caramely’, ‘fruity’, and ‘slight aftertaste’. As a general rule, the darker the honey the stronger the flavour. All honey has similar sweetness however in stronger flavoured honeys the flavour disguises the sweetness.

Stephen and Robyn are always willing to share their beekeeping knowledge with interested people or aspiring beekeepers. Honey is a natural sweetener with UK research proving that using honey as a sweetener for children instead of sugar results in 75% less cavities. Stephen and his wife Robyn came to Narrandera from different directions. Stephen moved to Narrandera to be in a good honey producing area. Robyn is a retired school teacher from Ohio, USA. Stephen and Robyn are not certified organic but follow organic principals in the harvesting and bottling of Tanta Gold Honey. Tanta Gold Honey buyers are people who want a natural product they can trust from the local environment.

Website: www.uarahfisheries.com.au
Uarah Fisheries was established in 1977 by father and son Jim and Bruce Malcolm. The business was initially set up as a hatchery breeding Murray cod, Golden perch and Silver perch for restocking fish into the Murray Darling System for recreational stock enhancement.
In the late 1980s, Bruce saw the potential of Murray Cod as an aquaculture species as it was already regarded as a good table fish. Uarah Fisheries approached NSW DPI (then NSW Fisheries) to undertake research to determine the suitability of Murray Cod as an aqua culture fish. NSW Fisheries told us the fish was totally unsuitable as an aquaculture species and that we would not succeed. Believing that was incorrect Uarah Fisheries then decided to undertake its own private research and managed to develop the techniques for weaning fingerling Murray cod onto an artificial dry pellet diet. This private research has lead to the establishment of a developing industry of Murray cod aquaculture both domestically and internationally.

Uarahs’ Murray Cod is highly regarded by some renowned international chefs and rated as one of the top three fresh water aquaculture fish in the world. Uarah Fisheries has been providing Murray cod for 25 years to top tier restaurants in Sydney and features in books produced by well known chefs.

Developing this niche product took a lot of hard work and Uarah Fisheries are proud of what has been achieved. Significant work was undertaken to change the Murray Cod from a territorial fish into a schooling fish and in doing so the fish has to be weaned onto an artificial dry pellet diet.

Uarah Fisheries have made a very important contribution towards aquaculture with Murray Cod now recognised internationally.

Location: 10-14 Twynam St, Narrandera
Facebook: www.facebook.com/Vinnies-Fruitz-118708268212972/
Open from 7:30am to 6pm Monday to Saturday, this local fruit and vegie store offers local and regional produce. If you aren’t planning to visit all the wonderful produce outlets the region has to offer, then Vinnies is a great place to start and stock up.

Location: 586 South Yalgogrin Rd, Barellan
Website: whisperingpinesorganics.com.au
Whispering Pines Organics are proud Australian farmers based near Barellan, where they grow Certified Organic wheats and oats for the domestic human market, plus a range of animal foods and supplements.  They choose to produce their crops this way to assure customers their products are completely free from synthetic fertilisers, pesticides, herbicides, Genetically Modified Organisms (GMOs) for their health benefits, and to ensure wildlife, soils and family are free from any chemical exposure. Their farm has been Organically Certified with AusQual for ten years with annual audits to ensure the highest quality is maintained.

In 2011 they commenced adding value to their crops, on their farm, when they purchased their first stone-ground mill to produce flour. They took this portable mill to Farmers Markets where queues would form as people waited for sometimes up to an hour for their on-the-spot-milled flour! They realised there was demand for freshly ground organic flour and so the expansion continued. The next mill was twice the size yet they have now outgrown this one, too.  In June 2013, they imported a very grand stone-ground mill from Austria which has increased their output capabilities dramatically. This compliments the rolling mill with which they produce their own Whispering Pines Organic Creamy Rolled Oats.

Many consumers now want to know where their foods have originated, who has grown them and how they’ve been produced. By stocking Whispering Pines Organic products you can satisfy this growing demand while actively partnering with a progressive Australian farming family.